…is one of the thoughts I came away with earlier today as I walked past the guarded case containing the signed copy of *The Emancipation Proclamation. Only allowed to be out in light a measly 48 hours every YEAR to limit it’s exposure to light, naturally the line to view it was already wrapped around the side and front of the building by the time we arrived at the National Archives 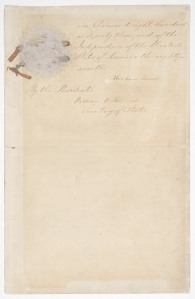 building in DC at mid morning. Still the line moved relatively quickly inside and out and within an hour and a half of collective waiting-in-line time we were eyeballing Mr. Lincoln’s lovely John Hancock on the original and super faded document. January 1st 2013 marks the 150th anniversary of its signing.  I could go on to write about the divine providence of seeing this very document on Watch Night as many slaves in black churches did in 1862 praying and awaiting word that Lincoln’s proclamation would take effect, or how it’s signing also “announced the acceptance of black men into the Union Army and Navy”, or how I almost snuck and took illegal snapshots with my camera while inside the rotunda until the lady in line behind me who supposedly “didn’t know” she couldn’t take photographs (yeah right)  got called out and yelled at (loudly!) by one of the security guards (See…if she had my level of museum ninja stealth she would have turned the flash off and pretended she was just updating her status. Pssh, amateur….) But no, no…I wanted to write an entry on how pretty the handwriting was. Ok, I’m not quite that shallow, but upon viewing the other charter documents (The Constitution of the United States and the Bill of Rights) along with others found in the public vault I couldn’t help thinking about the importance of words, and writing and keeping records and journals. At the National Archives we viewed a film on William Still an African American abolitionist and Underground Railroad conductor who kept a most meticulous account of the escaping slaves he assisted. I also saw an infographic a few days back on my facebook feed about the difference in the habits of successful and unsuccessful people.  One of which being that successful people regularly kept journals.  Google it and you can find that many famous people throughout history kept them including just about every president (can’t wait to read Mr. Obama’s!) and that the it promotes both mental and physical well being.  My sister has several blank books lying eagerly around the house, one of which I will be snatching up shortly now that I’ve recognized that though my accounts of finding that $85 sweater at Macy’s for $30 may not be exciting or important now to anyone now ( though I don’t understand why it wouldn’t be! $30 people?! Come on!) some day it may provide a valuable insight into life in the year 2013.  Perhaps this is just an overly wordy substitute for a resolution to return to my journaling habit in the new year.

*The final proclamation has been rarely shown because it was badly damaged decades ago by long exposure to light. Conservators rotate which of the five pages are shown to limit their light exposure. For this viewing in Washington, they displayed pages two and five, which is Lincoln’s signature page. High-quality copies were shown in place of the other original pages.  So I got to view the actual signature page! 🙂